Humans have been naming the phases of the moon since there were people. Even before the Native Americans assigned names and meanings to the full moons, the Celtics did it as did the ancient Chinese.
The last full moon of 2012 began last night (Thursday 12/27/12) and peaked at 5:21 am this morning, but it will still be visible tonight. Last night and again tonight, the full moon will follow the sun’s path, rising around sunset and setting around sunrise on Saturday. Around midnight, the moon will be in a similar position as the sun during the summer solstice.

In areas where the sky is clear, the moon will be visible from dusk until dawn all over the world. It will be a full moon on a long night in the Northern Hemisphere and will ride low in the sky like the sun in winter in the Southern Hemisphere. North and South of the Arctic Circle where the sun stays below the horizon or there is no sun at all, the moon will mimic the position of the summer sun, hovering just above or below the horizon. 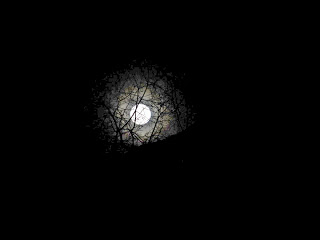 The December full moon shines in the center of a star formation known as the Winter Circle, a promise of where the sun will reside six months from now—a promise of longer days and warmer temperatures—a moon for wishes and dreams.

Each year, the Winter Circle is visible around the time of the Winter solstice. But this year, Jupiter is also visible near the star circle. It should be visible near the lower left of the full moon. It will be brighter than Sirius, the brightest star of the nighttime sky.

Throughout the Northern Hemisphere, this is the closest full moon to the December solstice, the longest night of the year. The Native Americans who lived in the United States named the recurring full moons to keep track of the seasons. Colonial Americans called December’s full moon The Christmas Moon while others followed Native American customs, calling it the Full Cold Moon or more commonly, the Long Night Moon.

The Long Night Moon was so named because it falls soon after the Winter Solstice, the longest night of the year. It was a great night to attack the enemy. And if you believe in the supernatural, a great night for werewolves, shape shifters, and vampires.

The Long Night Moon shines longer than any other full Moon of the year, brightening the sky as clearly as the sun for those with supernatural vision. And the further north one lives in the Northern Hemisphere, the more dramatic  the moon will be. In some areas, there will be three hours and 45 minutes more moonlight than sunlight. So beware! It will be a perfect evening for creatures of the night.

8 thoughts on “The Long Night Moon”