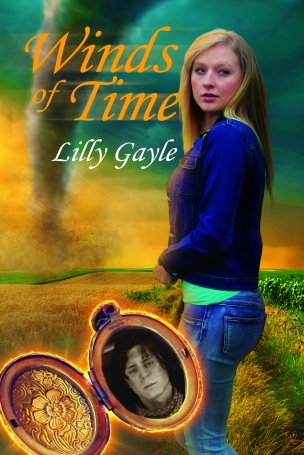 I’m happy to announce the release of my 8th book, a time travel romance, Winds of Time. I’m both excited and terrified. I originally wrote this book in 1997. The title was the same, but the characters had different names and it was an epic 440 pages. Crazy, right?

Needles to say, this was before I knew how to write a manuscript. It’s undergone many revisions, and the story has changed drastically. It’s now about 250 pages and it doesn’t read like a history book on the Native American conflict in the west. Or, I hope it doesn’t. I can never be sure until I get that first or even second review. And, I’m always terrified when an email pops up with a review. Whatever confidence I may or may not have had seems to fly out the window and I become a terrified “student” waiting to see how my teacher graded me.

I’m still not sure if people will like Winds of Time, but I do. It’s the main reason I never gave up on Selena and Dylan’s story, even when their names were Janelle and Justin. The names have changed but their hearts have not. I just hope they are better fleshed out now than they once were.

Even if they aren’t the book is live and ready for pre-order. So, I hope folks will give them a chance. And now, without further ado, I’m sharing the Media Kit for Winds of Time’s release. If you order and read the book, please let me know what you think. I’m dying to know.

Winds of Time, a time-travel romance by Lilly Gayle

Tagline: The past is her future, the future, her past, but can she save an innocent man’s life before history repeats itself?

As long as Selena Tillman dreams of her ancestor, Mary, who disappeared without a trace in 1872, she’ll never find peace. As long as she dreams of the half-Native American army scout accused of killing Mary, she’ll never find love. Hoping to end the dreams and learn the truth, Selena goes to Texas where Mary and the scout died and sees more than ghosts. She sees a tornado kill Mary in real time before it jumps to the twenty-first century to pull Selena into its vortex and send her back to the nineteenth century. Selena believes she’s fated to prove Dylan’s innocence and save his life, but Dylan isn’t just the man of her dreams; he’s her destiny.

Fed up with the army, bigotry, and women—especially white women, Captain Dylan Casey dedicates himself to solving the mystery of Mary’s disappearance, proving his innocence, and trying to stop a war between the whites and the Indians. Then Mary’s cousin shows up, claiming a tornado killed Mary. Dylan doesn’t trust Selena, but she’s his only ally in Canyon Creek. Yet despite their common goal, growing mutual attraction, and a Comanche shaman’s prophecy of a white woman who will change his destiny and foretell the fate of the Indian Nation, Dylan refuses to take a chance on another spoiled, white woman—until fate changes his mind.

Captain Casey stepped closer and raked his eyes over her, taking in her disheveled appearance. With surprising gentleness, he swept her hair from her forehead. When his fingers touched her flesh, her breath froze in her lungs, and every muscle in her body coiled. Shocked by the electricity in that brief touch, her knees buckled, and she sank back down to the sofa. When he hunkered down in front of her and took her chin in his strong hand, her breath caught in her throat.

“You really are hurt. What happened?” The deep timbre of his softly spoken question was like the man himself—sexy.

She met his probing gaze before lowering her eyes to the floor. “My horse threw me and ran off. I don’t know what spooked him, and I don’t know where he is.”

He rose to his feet and curled his lip. “Where are your trunks?”

“They’re due to arrive from Pecos later this week,” she said, unable to meet his gaze.

“Why would you leave your trunks in Pecos and travel alone on horseback? Why not wait at the hotel for the next stage to Canyon Creek?”

She was nervous enough without him towering over her, so she rose to her feet and forced herself to hold his intimidating gaze. “I felt a lot safer taking my chances on the road dressed as a man than I did staying in some skeezy hotel in Pecos where everyone knew I was a woman traveling alone.”

It was a reasonable explanation. She was wearing jeans in a time when women didn’t even wear slacks, and she had just shown up without taking the stage. He might have actually believed her if it hadn’t been for her modern vernacular.

He raked his eyes over her with a quirked mouth and skeptical lift of his brows. “You couldn’t fool a blind man in those clothes, and no man would wear an undershirt that color. You even smell like a woman,” he added, sniffing the air around her neck. When his nose grazed the tender flesh behind her ear, goose bumps raced down her arms. 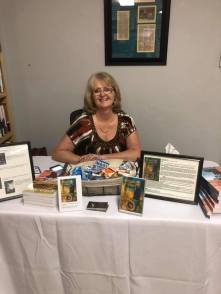 Award winning author, Lilly Gayle, is a wife, mother of two grown daughters, a grandmother, and a breast cancer survivor. She lives in North Carolina with her husband. When not working as an x-ray technologist and mammographer, Lilly writes paranormal and historical romances. She is the newsletter editor and VP of Communications for her local RWA chapter, Heart of Carolina Romance Writers.

Look for all of Lilly’s books online and in print at your favorite online retailer.

And her paranormal romances:

Out of the Darkness