Happy Friday 13th! Today’s blog guest is Isabella Macotte. Welcome, Isabella.
Lilly, thanks so much for having me as your guest!

So, Isabella, what do you do to relax?

Whenever I take a quiet moment for myself, a good book is always in the picture.

You can usually find me curling up in comfy sweats, a sturdy mug of hot cocoa and real whipped cream waiting for a sip, and a sleepy pup warming the side of my leg.
And the book: a romantic, fantasy-filled, humorous story, spiriting me away from a life filled with mundane but necessary tasks. A feisty heroine who knows her own mind and a hunky hero who thinks he knows what the girl wants all add to the fun.

I’ve always been grateful to the wonderful writers who’ve helped me escape to another place and time. Now, I’m honored and humbled to be counted in their ranks.

I write what I love to read: historical, sexy, funny, all tied together with paranormal elements. Hopefully romance readers will give me a chance to share in their world now. I’ve written The Heart Gem for each and every one of you.

And I can’t wait to read it. I love historical and paranormal romance. In my opinion, these two genres go together as well as milk and cookies!

Biography
Isabella Macotte grew up in Chicago and now lives in the Midwest. Ever since she can remember, she was reading. Not just fiction but everything she could get her hands on. Science, romance, history and paranormal. Especially paranormal…anything scary, creepy, or gory, she loves it. From light paranormal elements to terrifying monsters, she’ll make up a story to amaze or scare you.

Isabella Macotte writes the kind of romance she loves to read: a story with delicious dialogue, seductive encounters, a dash of the paranormal, and an irresistible hero you will never forget.

Passionate about books, Isabella keeps busy reading, writing and working in a library. But if a few moments remain at the end of the day, she spends them with a wonderful family and sweet bichon pup named Daisy.

In 1885, a proper Victorian woman’s place was in the home. Convention never appealed to Hallie Pinefoy.

But plans for financial independence through a successful doll-making venture have one impediment. She’s inherited a curiosity shop and a handsome business partner who’s proving to be a delicious distraction.

When Bremen Tyler inherits a shop in coastal England, he breaks from the mystical Ancestral clan to live a normal life. The only way to guarantee a permanent break is to marry his Heart Match, a perfect soul mate. Bremen recognizes the captivating Hallie as his true love, but she isn’t cooperating with his courtship.

If he can retrieve the stolen Heart Gem, an Artifact of Love, he can use it to prove their match. The surface of the Gem reflects the essence of a couple’s future life, but the risks are great. More importantly, will Hallie realize true love doesn’t need proof?

EXCERPT:
Hallie’s bottom shifted from Bremen’s lap onto the cold stone garden bench. Why was he stopping just when the moment was getting interesting? Then she heard the footsteps in the distance, rustling along the garden path. Her head still blissfully dazed, Bremen’s possessive hands moved to straighten the aquamarine gown’s bodice, which had drawn away completely from her breasts.
Clay’s face was an angry red, even in the dark night. She jumped at the intrusion and attempted to yank her hand out of Bremen’s, but his firm palm held on without releasing.
“Bremen Tyler, how dare you encroach on our relationship? Hallie and I have a long-established agreement among our families. You must honor this arrangement and withdraw your presence.” The shrillness of Clay’s voice reverberated through the grounds.
“I haven’t been informed of a promise or understanding. In fact, I have heard from the lady she is uncommitted. A state I’m determined to reverse.” Bremen’s deep voice was low and controlled.
“She would be committed to me if it were not for you. You are confusing her; she loves me but you are filling her head with promises and nonsense.”
“I have given Hallie neither false promises nor nonsense. She knows my true feelings.”
“She also knows my feelings and has said she will consider my offer.”
“If Hallie tells me it is you she wants, I’ll say no other word.”
“Hallie, tell him you will marry me. I believe my request was clear at supper,” Clay demanded.
“My love, make your wishes known, and we will visit the reverend directly,” Bremen countered.
Both men stared, waiting for a decision.
***
TWRP BUY LINK:
http://www.thewildrosepress.com/index.php?main_page=product_info&cPath=176_138&products_id=4797
AMAZON LINKS
http://www.amazon.com/The-Heart-Gem-ebook/dp/B007PJMEXA/ref=sr_1_1?ie=UTF8&qid=1333495228&sr=8-1
http://www.amazon.com/The-Heart-Gem-Isabella-Macotte/dp/161217048X/ref=tmm_pap_title_0?ie=UTF8&qid=1333495228&sr=8-1
Beth Trissel, cyber friend and fellow Wild Rose Press author lives in the mountains of Virgina where she pens amazing stories of love rich in history. Her time travel romance, Somewhere My Love earned it’s place on my keeper shelf.
So, please help me welcome Beth as she shares a bit about her latest book in the Somewhere series… 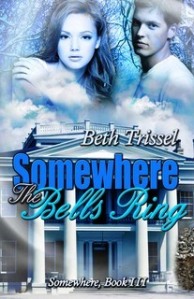 My fascination with the past and those who have gone before me is the ongoing inspiration behind my historical and light paranormal, time travel romances.  I’ve done a great deal of research into family genealogy and come from well-documented English/Scots-Irish folk with a smidgen of French in the meld, a Norman knight who sailed with William the Conqueror.  One family line goes directly back to Geoffrey Chaucer.  And there’s a puritan line with involvement in the Salem Witch Trials—my apologies to Susannah Martin’s descendants–but that’s another story.  In my recent light paranormal release, Somewhere the Bells Ring, I more deeply explored my Virginia roots.

Somewhere the Bells Ring is book three in my Somewhere’ series (not necessary to read these in order) with a Christmas theme.   Set in the old family homeplace where my father was born and raised, a beautiful plantation home from the early 19th century, the story opens in 1968 during the tumultuous age of hippies, Vietnam, and some of the best darn rock music ever written.  From that nostalgic year, the story flashes back to an earlier era, 1918 and the end of World War One.  Having a Marine Corps Captain Grandfather who distinguished himself in France in the thick of the fighting during The Great War and then tragically died when my father was only three definitely influenced this story.
If you enjoy an intriguing mystery set in vintage America with Gothic overtones and heart-tugging romance then Somewhere the Bells Ring is for you.  And did I mention the ghost?
Blurb: Caught with pot in her dorm room, Bailey Randolph is exiled to a relative’s ancestral home in Virginia to straighten herself out. Banishment to Maple Hill is dismal, until a ghost appears requesting her help. Bailey is frightened but intrigued. Then her girlhood crush, Eric Burke, arrives and suddenly Maple Hill isn’t so bad.
To Eric, wounded in Vietnam, his military career shattered, this homecoming feels no less like exile. But when he finds Bailey at Maple Hill, her fairy-like beauty gives him reason to hope–until she tells him about the ghost haunting the house. Then he wonders if her one experiment with pot has made her crazy.
As Bailey and Eric draw closer, he agrees to help her find a long-forgotten Christmas gift the ghost wants. But will the magic of Christmas be enough to make Eric believe–in Bailey and the ghost–before the Christmas bells ring?~
Excerpt:
“Bailey.” He spoke softly, so as not to startle her.
She turned toward him. In her long, white nightgown, hair tumbled down around her, wearing that lost look, she bore an unnerving resemblance to the mysterious woman in Wilkie Collins’ classic mystery, The Woman in White. Eric fervently hoped the similarity ended there. As he recalled from the novel, that unfortunate lady had been unhinged.
Leaving the door ajar, he stepped inside. “We missed you at breakfast.”
She answered distractedly. “I wasn’t hungry.”
He limped to where she stood, the hitch in his leg a little less pronounced today. Maybe he was getting stronger. “Why are you here, looking for ghosts?”
“Or a door to the past.”
He tried to coax a smile to her trembling lips. “Did you check inside the wardrobe?”
“Eric, I’m being serious.”
“That’s what worries me.” Leaning on his cane with one arm, he closed his other around her shoulders and drew her against him. Such a natural act, and she accepted his embrace without pulling back. She smelled of flowers from her perfume and wood smoke. “Mercy, child,” he said in his best imitation of Ella, “it’s as cold as a tomb in here.”
“It wasn’t last night.”~
***Available in various eBook formats from The Wild Rose Press, Amazon Kindle, All Romance Ebooks, Barnes & Noble’s Nookbook and other online booksellers.