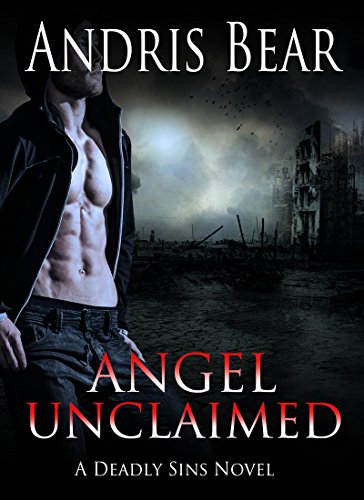 k picks up immediately after All Wicked’s Eve.*
Gifted with the curse of darkness, Nina Blackfox’s life has never been her own. She’s accepted it—Hell, embraced it. Until the destined path crumbles out from under her, leaving her on the precipice of destruction.

The battle she was meant to face has become a war, and she’s not sure which side she’s fighting for—Heaven or Hell.

Cursed with the gift of Volition—the ability to press his Will on another—Archangel Benaiah avoids temptation at all costs. Which was a hell of a lot easier before a meddlesome Fate assigned him a woman who threatens to scorch his soul with one look from her cool, midnight eyes.

Heaven has fallen to the enemy, the world into darkness, and all Benaiah wants is to follow Nina into the shadows…

Andris Bear does it again with book 7 in the Deadly Sins series. So, let me preface this review by saying one thing. Read the rest of the series. This book pics up where All Wicked’s Eve left off. Ms. Bear is kind enough to warn the reader of this fact in her usual snarky and hilarious way. She’s also added a cast of characters to the back of the book as a reminder to those of us who’ve read them all and for those who are coming in at the middle of this unique and complex series.

I think a reader could probably just read the last 3 books and still know what’s going on, but why would he/she want to? This is an engaging series and I can’t wait for the next installment.

But if the apocalypse isn’t exciting enough, we have a cast of passionate characters willing to sacrifice all to save the world, and Nina and Beniah are no exception. They know what they must do to stop Satan, and they know saving humanity could mean the end for them and their love. But the scariest part is knowing the world isn’t supposed to end this way. Nothing is right. Fate and destiny no longer have meaning in this new world order.

So, how can they stop the apocalypse if the old rules no longer apply?

This is a fast paced romance with a lot of snark, a dash of comedy, and sexual tension that will leave you as breathless as the action.

Andris blames her mother for her fascination with books.  Growing up in northern Indiana, there wasn’t much to do and she’d often complained of boredom.  Her mother han

ded her a book and told her to shush.  She’s been obsessed ever since.

Though  she spent most of her time in between the pages, fantasizing of other worlds,  she didn’t write her first book until she’d had three children—just in time to have not a moment to herself.  In an attempt to keep her sanity, she writes.  Her favorite stories contain strong heroes and heroines, fighting an attraction stronger than both of them.

She lives in eastern North Carolina with her hero and their three mini villains in chaotic bliss.

You can find Andris at https://andrisbear.com/my-writing/ and on Amazon.