In honor of America’s Independence Day tomorrow, my guest, contemporary

romance author, Skye Taylor,  is sharing a free read. I’ve read several books in Ms. Taylor’s The Camerons of Tide’s Way series, and I have fallen in love with the characters and her fictitious little beach community, Tide’s Way, North Carolina.

Her free read, Happy Birthday 4th of July, is set in Tide’s Way.

“I’m not going.” Natalie plopped her chin onto her fisted hands and slumped in her chair. Mutiny glared back at me from her pretty green eyes. Eyes almost as green as her father’s.

Truth be told, the last place I wanted to be on this day of celebration, parades and fireworks was at a beach party. Today was my birthday, too, and staying home and close to the computer in case Jeff found a moment to Skype with us would have been my preference. But we didn’t have a choice. I’d not only committed myself to attending the Camerons’ annual Independence Day party, but I was in charge of churning the homemade ice cream.

“We have to go, honey. Remember we cooked all that ice cream last night? Now we have to go so we can churn it, and everyone gets to taste how wonderful we made it. We promised.”

“I didn’t promise anyone anything.”

“You promised daddy you’d be good while he was gone, and that you’d help me whenever I needed helping.”

Natalie kept her unhappy pose, but the rebellion was fading from her eyes. My daughter and I had a lot in common and unquestioning love for Jeff was one of them. Even as a brand new bride, I’d never questioned Jeff’s decision to accept a commission in the Marine Corps, and I’d promised to be strong every time he deployed. It just never got easier.

I hauled the cooler to the center of the kitchen floor and began loading the tubs of pudding that would become ice cream with the help of a lot of ice, a little salt and an hour or so in a churn.

Natalie slid off her chair and squatted beside the cooler.

“Don’t forget the Oreos.” Cookies and cream was her favorite flavor.

I handed her a baggie with the already crushed cookies, and she hugged them to her eight-year-old chest. “Are you making Daddy’s favorite, too?”

I reached for a second baggie, this one filled with crushed Heath Bars. “Yup. We’re making strawberry with real strawberries, and chocolate, too.”

“That’s a lot of ice cream,” Natalie remarked getting to her feet.

“Well, there’s going to be a lot of people to eat it. Go get your bathing suit and a towel and we’ll be on our way.”

***
Two hours later, I pushed my damp bangs off my forehead with the back of my hand before lifting the last batch of ice cream from the bucket of ice.

Distracted by the crowd of kids frolicking in the ocean and making sand castles on the beach, Natalie had put aside her worries about her missing father. I wasn’t so fortunate. All around me were happy families. Happy wives whose husbands tended the grill, or set up tables and chairs. Occasionally one of those husbands would pass his wife and pause long enough to offer an affectionate kiss or pat her bottom with an appreciative hand. One of the tall Cameron brothers stood with his arms about his wife’s waist, his chin resting atop of her head, while they kept watch over the kids in the water.

Everything in me ached for Jeff. He’d been gone so long I almost didn’t remember what it felt like to have him around, patting my bottom and claiming kisses when I was busy with some project and barely aware of his presence until he touched me. Every time he returned home, I promised myself that I was going to remember every touch, every funny little thing he did that made me smile. But then he’d deploy again and as the weeks turned into months, the memories would fade. The only things that never faded were the love in my heart and the ache of missing him.

“Here, I’ll take care of that,” Ben Cameron squatted beside me and reached for the bucket full of salty, icy water and half melted cubes. “You okay?” He peered at me with a furrow between his eyes.

I forced a smile to my lips. “I’m fine.” I stood up and stretched my cramped muscles. Four churns full of ice cream had kept me hunched over the churn almost since I’d arrived at Ben’s parent’s home.

“It’s not easy,” Ben said softly as he straightened up. He glanced toward the group of kids where Natalie stood slightly to one side, momentarily remembering what was missing from her life.

Ben knew better than most. He’d married a Marine, too.

I shook my head, agreeing with him, but unwilling to talk about it.

Ben wrapped an arm about my shoulders and gave me a quick hug. “You’re not alone, you know. You can call me any time if you need anything.”

My eyes stung with sudden tears. “Thanks.” I didn’t trust my voice to say more because the understanding in his kind blue eyes almost undid me.

Ben hefted the bucket and trudged off to dump it.

I blinked hard to get my raw emotions back under control, and a few minutes later Sandy Cameron announced that it was time to eat. A mad dash for the tables began.

I backed away from the jostle and chatter, still doing my best to pull myself together and put on my happy face again. Even Natalie was caught up in the bustling line of people reaching for plates and loading them with food. I was alone at the edge of the happy celebration. My heart was half a world away.

Suddenly everyone was looking my way. Natalie turned from the table and dropped her plate with a shriek. For a moment I just stood there, puzzled and uncomprehending. Then the sensation of his presence hit me, and I sucked in a gasp of shock and surprise.

Jeff was home. He was with me. Not half a world away. I turned just as his strong arms closed around me. The real fireworks wouldn’t happen for hours, but they paled in comparison to the explosion of joy in my heart.

Natalie barreled into us, and Jeff scooped her up to join in our embrace. He kissed Natalie’s cheek, then my mouth. A long and hungry kiss full of promise.

“Happy Birthday sweetheart,” he whispered. “How did you like your present?”

About the author, Skye Taylor

Skye Taylor lives in the oldest city in the US where she finds inspiration dressing up to participate in historical activities and walking on the beach. She loves travel and adventure and has jumped out of perfectly good airplanes, camped on remote tropical Islands, climbed a volcano, ridden an elephant and rafted down rivers in Southeast Asia and explored old castles in Europe. She spent two years in the South Pacific as a Peace Corps volunteer (2002-2004) She’s a mom and grandmother and the author of the Camerons of Tide’s Way contemporary romance series: Falling for Zoe, Loving Meg, Trusting Will, Loving Ben and Mike’s Wager as well as a mainstream political intrigue: Whatever It Takes. She is a member of Florida Writers Association, Women’s Fiction Writers Association, Romance Writers of America and Ancient City Romance Authors.

From the Camerons of Tide’s Way Series:

When Meg Cameron, a Marine MP, returns from a war zone, she and her husband Ben struggle with the toll guilt & loss have taken on their marriage. Ben is also fostering a police dog named Kip who lost his handler and his spirit to a perp with a gun. As Ben tries to help his wounded warriors find healing, Meg strives to fit back into her civilian life and debates a return to active duty. Ben’s fears mount. What if her pain and confusion take her back into harm’s way again, and he lost her forever? 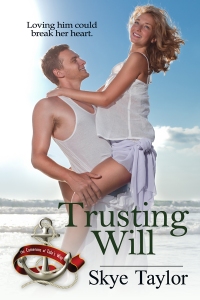 Brianna Reagan’s life fell apart when her husband was killed in combat. Now, she has a new life and a new job in Tide’s Way, and she’s convinced that her eight-year-old son Sam is all the man she needs in her life. Then Sam joins the Cub Scouts and Brianna meets his scout leader. Will Cameron has a killer smile, and he isn’t shy about his interest in her. Unfortunately, he’s a state trooper. Another fearless hero who puts his life on the line for the sake of others. Can she put her heart in harm’s way again for him?

And you can find the rest of the books in this heart-warming series on Amazon as well.