Earlier this month, I made an unexpected trip to Germany to visit my daughter. She was having some minor surgery and needed her mom. So, off to Europe I went.

I flew out of RDU in Raleigh, NC the last Friday in January for a week-long vist. It was 70 degrees that day, which is unusual, even for North Carolina. But we’ve been having a mild winter. It’s not uncommon to have wild temperature swings in February and March. During those months, it can be sunny and 70 one week and below freezing and snowing the next. But I’ve never gone from 70 to 17 degrees in less than twenty-four hours before. I did that day.

My connecting flight was in Philadelphia where I expected it to be much colder than in NC. Apparently, Philly is having a mild winter this year too. I arrived at the airport in the City of Brotherly Love late in the afternoon and the temp was still hovering around 58 degrees. Not bad. I had on a sweater so I didn’t even put on my coat when I stepped off the plane and rushed through the airport to make my connecting flight to Munich. But when I arrived in Germany nine hours later, I was in for a real surprise. It was snowing.

As we circled the runway, the pilot announced the current time and weather. The time was 8:00 a.m. and the temperature outside was 17 degrees Fahrenheit with snow flurries.

Flurries? I could see the snow covered fields from the sky.
I about froze the moment I stepped off the plane.

Luckily, my daughter had warned me about the bitter cold so I was prepared. And my son-in-law’s car has heated seats.

It’s 193 kilometers or approximately 120 miles from Munich to Weiden, where my daughter was recovering from surgery at the hospital there. But thanks to the autobahn and no speed limits in sections, my son-in-law made the trip in just under two hours, despite the snow. Than again, the snow plows and brine trucks had started clearing the snow the moment it started falling. Despite the somewhat scary speed at which we traveled, I was able to enjoy the beauty of the Bavarian countryside.

I’ve been to Germany twice before but this trip was different. It wasn’t a vacation, and I hadn’t planned for it. I’d gone to be with my daughter after her surgery, which turned out to be less invasive than originally expected and with a much better outcome. While I was there, I got to visit a German hospital which isn’t something I’d normally do on a visit to another country. But it was educational.
In the US, I work in a hospital, but it’s nothing like the one I visited in Weiden. For starters, US hospitals don’t sell beer in the hospital cafeteria. The hospital in Weiden did! 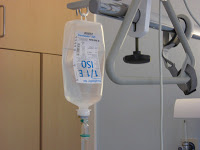 The rooms look similar, but the beds looked more like glorified stretchers. Some of the equipment looked the same as in the States but in the US, most hospitals use IV bags. My daughter’s IV was in a plastic bottle the hospital recycles.

Thank God, my daughter’s hospital visit was brief and she recovered quickly–more quickly than anticipated. So, what started out as a visit to take care of her turned into something fun. We got to spend quality time together without her having to stay in bed.

By the middle of the week, we were able to get out and take a walk through her neighborhood and town.

We ate at a nice Chinese restaurant where I enjoyed a nice, dark Dunkelweizen. We visited some of my daughter’s friends, went to a German deli, and on the last day of my visit, we went shopping in Weiden.

Although this wasn’t my first trip to Germany, it was the first time I’d every traveled alone. I was a bit intimidated at first, but on my international flight to Munich, I slept with a handsome 31 year old man. Just kidding!

My “seat mate” on the plane was a cutie from Texas and we did sleep a bit on the plane. He was traveling to Munich on business. He’d previously spent two years in Germany while working for the same management firm. The woman who’d taken his place when his work Visa expired was taking some time off for maternity leave and my handsome seat mate was going back to Germany to fill in for her.

Although we never exchanged names, he was a nice young man. He was also quite handsome. Standing well over six feet tall, he reminded me of Matthew Perry from the Friends TV series. We had a nice chat and I thought of several ideas for a possible romance novel that could start on a plane. Imagine falling in love on an international flight and getting separated in the airport only to realize you’d never exchanged names or information to help you find that person again.

I was intrigued by the concept of writing such a story. But I write historical and paranormal romance. Perhaps I could change the plane to a coach. Or, my handsome Matthew Perry look-a-like could be a werewolf returning to Germany in search of a cure. Since the first recorded Werewolf sighting was around the countryside of German town Colonge and Bedbur in 1591, I could incorporate some of the sites I’ve seen in Germany. Or, maybe I’ll have to try my hand at writing romantic suspense.

What do you think?