Today I have a super author celebrating the release of her super romance. Please welcome UK author, Rachel Brimble!

Summer is upon us and after a fabulous two weeks in Rhodes, it is back to juggling the kids around getting the work in progress finished. Well, the first draft, at least. This will be book five in my Harlequin Superromance Templeton Cove series.

It has always been a writing goal of mine to write a series – having loved Nora Roberts’, Robyn Carr’s and Jill Shalvis’ series. I loved the idea of revisiting t

The latest book in the series (and available to buy now!) is What Belongs To Her. This is Sasha and John’s story and set against the Cove’s fairground. A contemporary romance with a hint of suspense, I loved writing this book because I not only have many happy, childhood memories of our local fairground, but it also gave me a great starting place to mix the bad with the good. In fairgrounds you have lots of corners, mayhem and noise…along with a lot of laughter, cotton candy and fun. The blend of these things inspired my imagination.

All the books in the Templeton Cove series can be read as stand alone, but I really hope my editor wants me to continue the series once I hand in this book. There are still at least three secondary characters who have appeared in What Belongs To Her as well as the first two

books (Finding Justice & A Man Like Him), who I think deserve their own happy ever after.

Do your readers have a favorite series? A childhood memory that they would love to one day use as the backdrop for a story?

Blurb & Excerpt from What Belongs To Her – Harlequin Superromance

She’s ready to take back what’s hers

Since the moment a local crime boss claimed ownership of her family’s fairground, Sasha Todd has dreamed of righting the wrong. Now it’s time to act, and backing down from the man’s estranged son is definitely not an option. After all, giving up her legacy to hot-blooded John Jordon means losing the chance to finally heal the wounds in her past.

Stopping John in his tracks—and resisting the sizzle between them—is Sasha’s best defense. But there’s more to him than she thought, which changes everything. With what matters most at stake, she’ll have to risk a brand-new future with John, or walk away from the man whose heart belongs to her.

The machine rumbled to life and John froze.

Gripping the lap bar, he hauled it up and stood. Sasha Todd gracefully skipped up onto the steel platform beneath the carriages. She was dressed in white shorts that revealed her long slender legs and a simple red T-shirt. His breath caught. Did she have any idea how stunning she was?

She smiled, mischief glinting in her black eyes. “Sit down, John. Let’s take a ride.”

He blinked. “Are you crazy?”

He tried and failed to muster some semblance of authority as the machine started to move. “No. Turn this thing off.”

She quirked an eyebrow and curved her fingers over the back of the carriage. “Yet you want to run this place? You can’t do that without knowing the fairground inside out. That includes the rides. Move over, I’m jumping onboard.”

Their eyes locked and once again, his tongue stuck to the roof of his mouth. Why the hell did the woman managing the fairground have to be so physically arresting? God, he wanted to write about her. Describe her in words in a vain attempt to let the damn world know how unnervingly beautiful she was.

He lowered into the seat, steadfastly avoiding her gaze. He concentrated on keeping his pride in place and not giving in to the temptation to grip the bar again. The ride picked up speed and the carriage shifted as she hauled herself up and sat down next to him, pulling the lap bar down with her.

The distinct smell of something musky and sexy drifted as she tossed her long hair over her shoulders. The tendrils whispered across his cheek and John closed his mouth, trapping the inconceivable urge to groan.

She wriggled her behind deeper into the seat and settled back with a sigh. “So…what’s the plan today? Enjoy the fair? Cook the books? Fire me?”

Attraction gave way to irritation, fueled by the nonchalance in her voice. “You do realize this thing is moving, right?”

She shrugged and glanced around before focusing entirely on him. “Sure. Now is as good a time as any to get acquainted, don’t you think?”

John swallowed. Jesus, her eyes are ebony black, like two huge pieces of jet. He snapped his face forward. “Do you know something?” He slid his arm across the back of the carriage above her shoulders. “If you want to play some stupid game in a bid to annoy me, that’s fine. I’m the one in control here, whether you like it or not.” 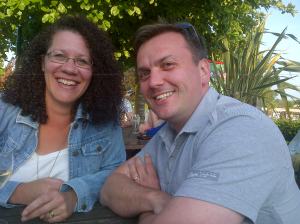 Rachel lives with her husband and two young daughters in a small town near Bath in the UK.  After having several novels published by small US presses, she secured agent representation in 2011. In 2012, she sold two books to Harlequin Superromance and a further three in 2013. She also writes Victorian romance for Kensington–her debut was released in April 2013 and she has since signed for three more.

Rachel is a member of the Romantic Novelists Association and Romance Writers of America. When she isn’t writing, you’ll find Rachel with her head in a book or walking the beautiful English countryside with her family and beloved black Lab, Max. Her dream place to live is Bourton-on-the-Water in South West England.

She likes nothing more than connecting and chatting with her readers and fellow romance writers. Rachel would love to hear from you!