In school, we learned that the Declaration of Independence was signed by John Hancock, Thomas Jefferson, Henry Clay, Thomas Payne, and a bunch of other famous people on July 4th, 1776. There’s even this famous painting of the event that used to hang in my elementary school in Virginia. But that’s not the entire story.

The thirteen English Colonies in North America were already at war with the British when Thomas Jefferson wrote the Constitution at the suggestion of the other members of the Continental Congress. Jefferson penned the first draft in June 1776 and fellow committee members including Ben Franklin, Robert Livingston, John Adams, and Roger Sherman edited it and added additional charges against King George III of England. There were no delete buttons back then.  No back tabs or cut and paste. There wasn’t even white out.  Can you imagine the editing process? Everything had to be hand written again and again.

I wonder how many scrolls they went through before creating an error-free document?  Gives me hand cramps just thinking about it. But the document was written and sent to the King of England. It listed the thirteen colonies complaints against the crown and categorized the people’s rights while providing legitimate reasons for the colonists to declare independence.

The document was completed in late June and began like this:

When in the Course of human events, it becomes necessary for one people to dissolve the political bands which have connected them with another, and to assume among the powers of the earth, the separate and equal station to which the Laws of Nature and of Nature’s God entitle them, a decent respect to the opinions of mankind requires that they should declare the causes which impel them to the separation.

We hold these truths to be self-evident, that all men are created equal, that they are endowed by their Creator with certain unalienable Rights, that among these are Life, Liberty and the pursuit of Happiness.

In a letter written to his wife, John Adams commented that the second of July would be an epoch day in American history. If he had had his way, we would have celebrated the birth of America on July 2 because he believed that day should be commemorated as the day of deliverance, by solemn acts of God Almighty.

But that was not to be. On July 4, 1776, The Continental Congress approved the Declaration of Independence, but there was no internet back then. No evening news and no telephones. There weren’t even telegraph wires and the US Post office was in its infancy. So, the news had to spread by word of mouth and it wasn’t until July 8th that the New Americans celebrated their first Independence Day.

Philadelphians threw a big party. There was a parade and guns were fired into the air while people whooped, hollered and shouted with joy. George Washington’s army was camped near New York City and didn’t hear the news until July 9 and they had their own celebration then. But down in Georgia, they didn’t get the news until Aug. 10 and the British didn’t find out we didn’t want to be British any more until Aug. 30.

Once America declared its independence, a constitution had to be written. That feat was accomplished in 1787. It began with what is famously known as The Preamble:

We the People of the United States, in Order to form a more perfect Union, establish Justice, insure domestic Tranquility, provide for the 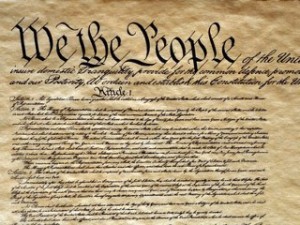 common defence, promote the general Welfare, and secure the Blessings of Liberty to ourselves and our Posterity, do ordain and establish this Constitution for the United States of America.

It Constitution was ratified  it in March of 1789. It serves as the fundamental law of the United States. It established the foundation for a republican form of government. The three branches of that government are the judicial, executive and legislative branches. Legislation writes the laws, executive branch interprets the law, and the judicial branch enforces it.

Before the constitution was ratified, The Articles of Confederation served as the country’s first written constitution. The document lacked continuity and individual states had too many rights which weakened the federal government. The purpose of the Constitution was to strengthen the Federal or central government and still maintain individual rights and liberties. Even after it was written, the government realized it was still a work in progress and over the years, amendments were added.

The Constitutions first ten amendments are the Bill of Rights, which became a legal part of the Constitution on December 15, 1791. It guarantees all Americans the rights to freedom of speech, assembly, religion, freedom of the press, and the right to among others. But there was some confusion in the early years about who deserved these rights. Women’s rights were granted gradually between 1848 and 1920. Slaves were considered property and even after the Civil War and the 13th amendment abolishing slavery, black people and African Americans were not granted the same rights as white people. Despite the 15th Amendment allowing black people the right to vote, it would take years of struggle and the civil rights movement before they were granted full and free voting rights in 1965. America is still struggling with civil rights, but we are learning.

Both John Adams, our second president and signer of the Declaration and Thomas Jefferson, our third president died on July 4th 1826, exactly 50 years after the adoption of Jefferson’s Declaration of Independence. The country took it as a sign of American divinity, which led to manifest destiny and our abuse of Native Americans. But as a country, we have grown and we have hopefully, learned from our mistakes. As a nation, I guess we are still, a work in progress. And by the grace of God, let us hope and pray that we do not repeat the worst mistakes of our past.