“We meet Valkyrie Victoria Storm in the middle of a blood bath, and we did continue on from there. I must say Melissa Snark has all the makings of an awesome story teller.”

Sr. Reviewer and Review Chair for the Paranormal Romance Guild

“A definite must read for anyone who enjoys urban fantasy.”

Fight For Your Write Blog

Just when you thought it couldn’t get any better… 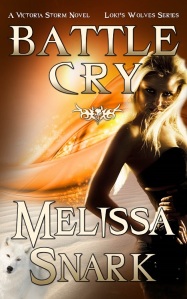 War with human hunters has devastated the werewolf pack of Sierra Pines. Only Valkyrie Victoria Storm and a handful of female wolves still live. With her mate dead, there is no one to protect her or her unborn child. An unwelcome attraction to a hunter complicates her life even further.  She reluctantly agrees to attend peace talks with Jake Barrett, the notorious Hunter King, a man who believes she murdered his son.

Hunter Sawyer Barrett has been trying to kill Victoria Storm for so long, he doesn’t know whether he loves her or hates her.  Desperate to end the war he started, he’s willing to take chances with everything but his heart, but he harbors a deadly secret he’s determined to keep.

When peace talks fail, Victoria does the only reasonable thing an angry Valkyrie can do: she kidnaps her worst enemy and makes her escape in a fire engine red convertible muscle car. All along an ancient evil plots the destruction of wolves and hunters alike.

THE CHILD THIEF (LOKI’S WOLVES #1) is free on Amazon and Goodreads.

Melissa Snark is a paranormal and romance author with a particular interest in werewolf and Norse mythology. Her Loki’s Wolves series combines elements of both in a contemporary fantasy setting. She lives in Northern California with her husband, three children and glaring of cats.

2 thoughts on “Just when you thought it couldn’t get any better…Battle Cry Cover Reveal!”