So excited to be doing another Character Interview with another fictional character. I love doing these, and today’s character is Dibs–David Brenner–from the novel She’s Got Dibs by author AJ Nuest. 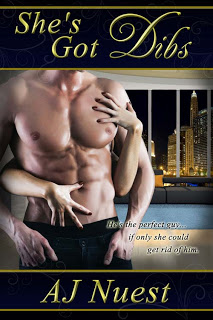 So, David, where were you born?

In Martha’s Vineyard Hospital, right off the cape. My parents were just finishing out the season at their summer estate when I came a couple of weeks early.  I’m happy to say, I’ve been causing them grief ever since.

Mmm. Handsome and rich. lol!  Where do you live now and what do you do for a living?

I have a lakefront home in Chicago and am currently the CEO of The Brenner Foundation. We’re a charitable organization that works with big money making firms to ensure they declare enough in write offs each year to off-set their taxable income — sorta my way of giving back for the privileged life I was born into. This past year most of those funds went toward a new school the foundation is building in Botswana, South Africa. I’m pretty proud of what we’ve accomplished over there, so far. Even though the travel did take me away from another, more personal, goal of mine.

Okay, I’m about to swoon here. Rich, handsome, and generous? You sound too good to be true. But maybe not. So, tell me, what’s going on in your life right now?

Pretty much the usual. Arguing with my dad over the direction my life has taken, fighting my mother’s interference in my personal life. Status quo for those two, although I can’t really blame them. It’s what they were born into, so controlling the lives of their children is normal for them. I can’t stand it, though. Never could. It’s the reason we don’t get along. I’m not really one for letting people tell me what to do.

I understand that. Family can drive you crazy if you let them. lol! But seriously, is there a special person in your life?

Why yes, there is. Tessa Adams. She’s…well, she’s unlike any woman I’ve ever met. Which is probably why she drives me so crazy–both in and out of the bedroom. She’s my best friend, knows more about me than anyone else. But I guess the most important thing is the way she accepts me for who I am, regardless of the money. That’s unusual for me. Most folks I know…it’s hard to determine if their attempts at friendship are genuine. Tessa’s the exact opposite. She’s completely transparent and I love that about her. She couldn’t care less if I’m impressed with her, and that right there impresses me more than any false attempts at trying to earn my attention.

How did you meet her?

*Dibs chuckles and glances around Lilly’s living room* That’s a funny story, actually. Our plane from New York to Chicago was grounded because of an ice storm that hit the Midwest. With a little devious interaction on my part, I made sure we were booked at the same hotel. What happened after that? Well, that’s a little personal. I’m not sure Tessa would appreciate me sharing the details. Perhaps you should ask her. She’s got carte blanche to explain what happened between us however she wants.

Hmm. I think I need to have a chat with Tessa. Sounds like y’all got to know each other pretty well that night. So, what’s keeping you two apart?

As far as I’m concerned, nothing. I was fairly certain the moment I saw Tessa, she was the one for me. After our first night together, I wasn’t left any doubts. The chemistry between us is…*Dibs lifts a devilish eyebrow*…highly explosive? She’s harboring a big hurt, though. One that can’t be fixed until she’s ready to let go of the past. Until then, I’m happy to wait. She’s too special to let go.

OMG! That is just too sweet. I’m really rooting for you two. But I got to know…How would you like to see this situation resolved?

Ideally, I’d like to see Tessa believe in love again, but I also know that might be asking a lot. In her line of work as an event coordinator, she’s seen a lot of relationships fail. This, coupled with what that jackass did to her, I’m not surprised she’s a little gun shy. Who wouldn’t be?

Sounds like some jackass needs an ass-whooping. lol! But you seem ready to take the next step. So, what’s standing in your way?

I admit, there are a few obstacles, but it’s nothing we can’t handle. Admittedly, if my family wasn’t so intrusive that would certainly be a big help. Foremost is probably Tessa’s insistence to control everything. But, again, I can’t say I blame her. She doesn’t trust easy. Then again, neither do I. It’s just one of many things we have in common.

Sounds like a match made in heaven to me. The question is, do you believe there’s a happily ever after in the future?

I sure hope so, but that’s sorta up to her. Once she gives me the green light, I’m all in.

I hope you guys can make this relationship work. It sounds as if you were made for one another.

I’d love to talk some more, but AJ has some information she’d like to share. So, before we wrap this up, is there anything you’d like to add?

Only that it was a pleasure visiting with you today. Thanks for having me and I know AJ sends her thanks along as well.

Thanks AJ for sharing David with us. And now, I’d like to share some information and buy links from sister rose, AJ Nuest, author of She’s Got Dibbs and creator of the very sexy, David Brenner. 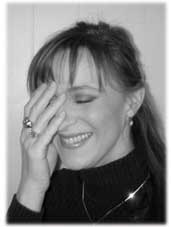 Award-winning author and editor, AJ Nuest, lives in a small farming community in NW Indiana with her loving husband, two beautiful children, and a bevy of spoiled pets. She and the cat are currently vying for dictatorship.
Book blurb:
True love does not exist…or so event planner Tessa Adams learns the day she gets jilted–twenty-four hours prior to walking down the aisle. One-night stands are much easier, and with sexy philanthropists like David Brenner, how can she resist? Now if she could just get rid of him. Had she known the biggest event of her career would be working for David’s father, she would have cut and run. Instead, she’s unwittingly become a part of his parents’ plan to destroy his life-long dreams. Will sacrificing her love protect him or be the ultimate betrayal? Wealthy and gorgeous, David Brenner seemingly holds the world in the palm of his hand–his generous heart and infectious smile are just two in an endless stream of attractive qualities. But the one thing he wants, he can’t have–a repeat of the passionate night he spent in the arms of a skittish Tessa Adams. His family’s far-reaching power threatens to crush their dreams. To prove his love, he would risk everything…but will the return of her ex-fiancé be their final undoing?
Excerpt:
“Dibs.” He extended his hand.
Frowning, she accepted his greeting. “Dibs on what?
“No.” He chuckled. “That’s my name. Or well, actually, my nickname. Either way, it’s what everyone calls me.”
“O-o-okay…” The guy definitely had the smolder covered…and those incredible ice-blue eyes. Yikes!
“And you are?”
“Oh, Tessa Adams.” She laughed.
“And everyone calls you…?”
Her frown returned. “Tessa.”
“Oh.” He scanned her face. “No nickname, huh?”
“Not that I recall at the moment.”
He pressed his full lips together as if restraining a smile, eyes twinkling with merriment, and handed her the notepad. “Here’s your confirmation number. The room’s at the Waldorf Towers over on Park.”
Two suites at the Waldorf? In this mess? What was he, a wizard? “Wow, great. Thanks so much for the help.”
“Glad to be of service.” He retrieved his briefcase and started down the corridor, abruptly stopped, and peered at her over the perfect slant of his shoulder. “And don’t worry, Tessa, I’ll think of a good nickname for you.”
She offered him a blank stare. “Hey, knock yourself out.”
Mischief danced along his lips before a grin broke free and he continued down the hallway.
“What a whack job,” she muttered.
Author links, webpages, fan pages, and book trailers.
She’s Got Dibs, won 1st Place in the Contemporary Category, Heartland Romance Authors, Show Me the Spark! Contest, 2010.
Website:  http://ajnuest.com
Blog:  http://ajbooks.blogspot.com
Email:  ajnuest@yahoo.com
FaceBook Page:  https://www.facebook.com/amyjo.nuest
Author FB Page:  https://www.facebook.com/amyjo.nuest#!/pages/Tattered-Pages/259835887466
Twitter:  @AJNuest
She’s Got Dibs Pinterest Page:  http://pinterest.com/ajnuest/shes-got-dibs/

16 thoughts on “I Got Dibs on David Brenner!”