1- When do you do your best writing? Morning? Evening? Or mid-day? And how do you organize your writing time?
I’ve never been a morning person and because I live in New York but am in touch with people in Mountain Time, 2 hours behind, I tend to stay up quite late at night.  So I don’t really warm up to writing until the caffeine has set in, in the afternoon.  I’m probably at my best early evening.  And because I travel a lot I have no organized writing time.  It’s a horrible thing to admit, I know, but I grab the time when I can.
2- Are you a reader as well as a writer? What have you read lately?
I’m an absolutely voracious reader.  I must have a book with me at all times, cannot bear to be sitting doing nothing in a waiting room or on the subway or whatever.  And I read just about everything from western and romance (which of course is what I write!) to biography and history.  I just finished Jenny Cockell’s Across Time and Death:  A Mother’s Search for Her Past Life Children.  Fascinating stuff and I recommend it.
3- How do you spend your free time when not reading or writing? Do you even have free time?
I make free time because I think it’s important to get away from the computer and get out.  After all, if you have no outside experiences, what do you know to write about?  As I said, I travel a lot.  These days it’s mostly out west where I visit ranches and go riding and do “western” things!
4- Since I love to travel and seldom do, I like to hear about other places. It’s one reason I love to read and write. I get to travel in my head. Much cheaper that way. Lol!  So, where do you live? What’s the it like? 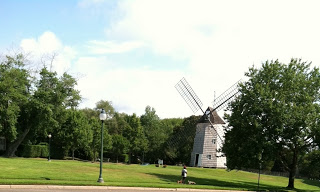 I live most of the year in East Hampton, NY, and the rest of the time in NYC.  I guess everyone knows what New York City looks like.  East Hampton is near the very end of Long Island, about 100 miles from NYC.  The place I live is approximately 4 miles from the Long Island Sound with its harbors and boats, and a similar distance from the Atlantic Ocean beaches.  The town was incorporated in the 1600s and it has tried—not always successfully of course—to keep its Olde Worlde charm with a village pond, windmills and some of the original houses, all clapboard of course. Aside from the beach and the sand dunes there are Pine Barrens—it’s a very flat area. Nowadays, however, the roads are a huge traffic jam in the summer and the village has shops such as Tiffany’s, Ralph Lauren and Gucci.  I prefer it in the winter!   We get 4 seasons here but the winter is pretty mild being near the sea and the summer’s much cooler than in the city.


5- Where is the most exotic place you’ve ever visited?
Tough one, Lilly!  I lived in Nigeria for a while, in Kano near the sahel (just below the Sahara) so that was pretty exotic.  But so was Ecuador where I got out on Lake Titicaca (I believe it’s the highest lake in the world) and visited the Uros Islands, which were fantastic.  They are man-made, woven in fact—fascinating. 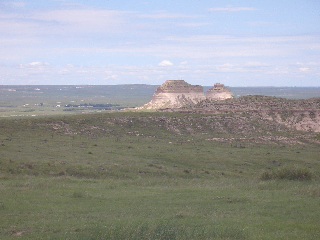 6- Was it vacation, business, or research? And, have you ever combined travel and research?  Ecuador was vacation—my daughter’s university graduation present in fact– but I have combined travel and research.  I went out to Loveland, CO for my book of the same name and visited that, as well as Cheyenne, WY and the Pawnee Nat’l Grasslands to get a feel for what the prairie was like.


7-So, tell us something about your latest release set in Loveland, CO and aptly titled: Loveland
It’s a western historical romance, and the background is the ownership of the large cattle companies by British aristocrats.  My heroine, Lady Alex, returns to the ranch where she spent some happy years as a child.  She is trying to develop a career in art but loves life in Colorado and, more particularly, one of the top hands, Jesse Makepeace.  Unfortunately, her family places demands on her and the relationship between Alex and Jesse undergoes numerous complications while problems also beset the ranch.

8- Lastly, what are you working on now?
It’s a double romance—two for the price of one, folks! There’s a mother and a daughter, and a (separate) father and son.  The mother is a successful writer of romance who cannot let romance into her life; her daughter has just lost her fiancé to leukemia and is trying to get on with her life.  The father blames himself for the death of his oldest son in Afghanistan while his younger son holds a secret that can blow them all apart.  But it’s also about the relationships between parents and children. And about the lies we tell ourselves to get by each day and, of course, it’s about finding love where—and when—you least expect it. 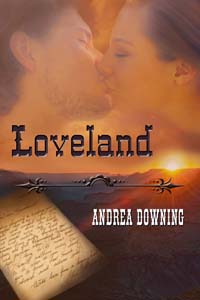 When Lady Alexandra Calthorpe returns to the Loveland, Colorado, ranch owned by her father, the Duke, she has little idea of how the experience will alter her future. Headstrong and willful, Alex tries to overcome a disastrous marriage in England and be free of the strictures of Victorian society –and become independent of men. That is, until Jesse Makepeace saunters back into her life…

Hot-tempered and hot-blooded cowpuncher Jesse Makepeace can’t seem to accept that the child he once knew is now the ravishing yet determined woman before him. Fighting rustlers proves a whole lot easier than fighting Alex when he’s got to keep more than his temper under control.
Arguments abound as Alex pursues her career as an artist and Jesse faces the prejudice of the English social order. The question is, will Loveland live up to its name?
Get your copy at:
http://www.amazon.com/Loveland-Andrea-Downing/dp/1612173233/ref=la_B008MQ0NXS_1_1?ie=UTF8&qid=1343850672&sr=1-1
Also available from: http://www.thewildrosepress.com/index.php?main_page=index&manufacturers_id=991
Sounds like a great story, Andrea. Thanks so much for sharing it today. I’m definitely adding it to my TBR list!