I love animals. I even like cats. But do they have a place in romance novels?

I used to like cats better than dogs until we got a small breed dog and let him stay in the house. Then I decided I liked dogs just as much as cats. Then my daughter got Cha Cha.

Cha Cha was a sweet kitten. But I should have known things would change when I caught him trying to nurse my dog–who’d never given birth and had been spayed years before. 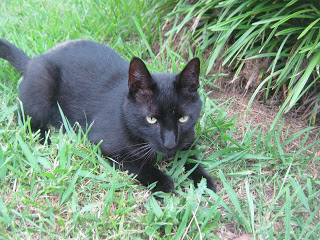 As Cha Cha grew–and grew and grew, he became a beast of a cat, bigger than my little Malti-poo, Teetee. And once my nephew showed the cat how to use the doggie door, all signs of sweetness in Cha Cha disappeared. He became a hunter, a wanna be jungle cat who stalks the night. And unfortunately, brings me gifts.

He’s brought in all sorts of critters, both alive and dead. Everything from squirrels and rabbits to rats, mice, birds, and moles. He brings birds inside and turns them loose in the house. Sometimes he takes them back out again, and sometimes I come home to find them hanging from a curtain rod or crapping on my walls.

Cha Cha once turned a huge field rat loose at my feet while I was sitting on the toilet! I had to beat the critter to death with the toilet plunger.

Teetee usually rescues me from the rats and mice by killing them and taking them outside for me, but this rat was freaking huge. Teetee was terrified. Cha Cha was amused. He plopped his fat tail down on the bathroom rug and licked his paws while enjoying the show.

He brought a full grown tree squirrel in once and turned it loose in the bedroom. The squirrel was so grateful for my intervention, he let me pick him up and rescue him. Despite my husband screaming at me to drop the critter before it bit me, I was able to take the furry little baby outside and put him back in the tree.

I found his corpse on the sidewalk the next day.

My doctor assured me there isn’t a large rabid squirrel population in north central NC. Rabies shots were not required and my tetanus shot was up to date.

Cha Cha takes over my house. He thinks he is king. He sits where he wants and sprawls were he wants. He can open doors and sneak into bedrooms and he demands kitty snacks every morning. I can’t open the pantry without him trying to get inside. 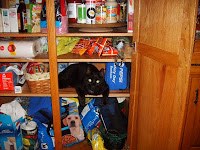 The other night, just before supper, I heard a terrified chirp. Cha Cha had snuck in with a bird. I found the cat in the guest room, terrorizing the poor little thing.

I bent down to rescue the bird. Cha Cha growled and dashed under the bed. So, I got down on all fours and grabbed Cha Cha by the tail. I dragged him out, but he left his prey under the bed.

I yelled for my husband to bring me a broom. I couldn’t see under the bed, but I could hear the bird and saw a shadow in the darkness next to the wall. I raked the broom under the bed, hoping to drag the bird out and set it free. I hit something with the broom. Eureka!

I dragged it toward me, reached for it with my hand. And….

Pulled out a dead squirrel in full rigor.

I screamed and dropped the squirrel. Cha Cha, taking advantage of my shock and disgust, dashed back under the bed. He grabbed the bird and ran. I yelled at my husband to get rid of the squirrel’s body while I took off after that damn cat.

Cha Cha ran for the doggie door. I ran out the kitchen door and tried to head him off a the pass. I caught up with him on the sidewalk and grabbed his tail. He dropped the bird. I picked it up and released it.

The bird flew two feet and crashed landed. Cha Cha grabbed it again. I chased the cat into the front yard in my bare feet yelling like a crazy woman–Lord only knows what my neighbors thought! Then I caught the cat and got the bird away from him again. This time, I put the bird in a tall tree in the front yard.

My husband warned me I’d most likely find the little feathered corpse in my bed the next day. Lucky for me I didn’t find it in my bed. Unlucky for the bird. I found his poor mangled body on the sidewalk.


Cha Cha was determined to deliver his “gift” whether I wanted it or not.


I’m just glad he bought the bird inside or I wouldn’t have found the dead squirrel until today when I vacuum–or worse, when it started to decompose and stink up my house! 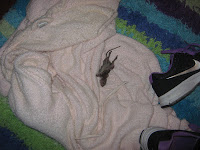 But my daughter shouldn’t feel slighted because her cat keeps bringing me gifts. He brought one to her today too, gift wrapped in the bathrobe she’d left on the floor.


I refused to get rid of it for her. She tried manipulating her daddy. She flashed those baby blues and asked ever so sweetly. Her daddy said, “Your cat. Your corpse.”


She wasn’t happy, but she took the carcass outside. And she’s still defending that beast of a cat!


“He was just trying to apologize for knocking stuff off my dresser this morning. I had to yell at him and the mouse is a make up present,” she said.


Make up present my ass. It was another murder victim brought inside my house to stink it up. Honestly, I think that cat hates me!


But my friends say I should write a book about him. They think my cat tales are hilarious. They don’t have to live with the little bastard. Then again, he can be so sweet when he wants. Trouble is, everything is on Cha Cha’s terms.

I don’t know if there’s a book about Cha Cha in my future, but I think he might just become a secondary character in a future novel. Most likely, he’ll be the antagonist. lol!

2 thoughts on “Do Animals Have a Place in Romance Novels?”