For most, it began like any other day. But early that morning, terror struck the nation at 8:46 am when Flight 11, crashed into the north face of the North Tower at the World Trade Center.

The plane plowed into the building between the 93rd and 99th floors with fully loaded fuel tanks, cutting off stairwells to the ground and sending a powerful shock wave down to the ground and up again. The plane ignited. People below the 93rd floor started to evacuate—no one above the impact zone could. The stairs were gone—elevators inoperable.
Between 8:48 and 10:28, people trapped on the upper floors of the north tower jumped to their deaths to escape the choking fumes and burning flames. It must have felt like hell on earth with death their only escape. Estimates range from 100 to 250 bodies fell to the earth. Daniel Suhr, a firefighter who arrived on the scene to help save lives, was hit by a falling body. The impact killed him instantly.

At  9:02, the New York Fire Department ordered an evacuation of the World Trade Center buildings, but one minute later at 9:03, Flight 175 crashed into the south face of the South Tower between the 77th and 85th floor. Parts of the plane exited the building and fell to the ground six blocks away. Millions saw the impact live. And they will never forget.
Following the second crash, an immediate evacuation began in the South Tower below the impact zone.
Above the 77th floor, one stairwell remained intact, but if was filled with smoke. Unable to climb down through the choking fumes, many climbed upward to the roof, expecting an air rescue, but the doors leading to the roof exit were locked and the smoke was too dense to attempt an airborne evacuation. Those who climbed up perished.
At 9:05, presidential aids informed President George W. Bush that a second plane had crashed into the WTC. The president was reading to elementary students. He was previously notified of a plane crash in the North Tower but it was believed to have been an accident. The second crash left no doubt. America was under attack. But the president was surrounded by five year olds and he didn’t want to alarm them. He finished reading and was later criticized for his initial handling of the situation. But would it have been better to terrify those children by dashing out of the classroom unexpectedly?
At 9:17, the FAA shut down all airports in New York City and by 9:21, all bridges and tunnels into and out of New York were closed. Otis Air National Guard established an air patrol over Manhattan and by 9:26, the FAA banned all civilian flights regardless of destination.
Also at 9:17, all military bases in the United States increased their terror alert to Threatcon Delta. Threatcon Delta means a terrorist attack has occurred or intelligence indicates an attack against a specific location is likely.

At 9:37, Flight 77 crashed into the Pentagon, setting it on fire. Luckily, most of the offices on that side of the building were newly renovated and still unoccupied. But all 64 passengers on the plane died along with 125 people in Pentagon.
9:43: Authorities evacuated the White House and Capital.
9:45: United States airspace shut down completely and all inflight aircraft were ordered to land at the nearest airport as soon as possible. All inbound international flights were redirected to Canada and Mexico. But Transport Canada closed it’s airspace as well. From that moment until September 14, 2001, there were no civilian planes in the sky. It was the first time in US history that air suspension was unplanned.
9:51: The New York Fire Department Battalion Chief reached the lobby of the 78th floor where many people in the South Tower had congregated to await rescue. The chief reported two large fires and numerous dead bodies.

9:59: Less than one hour after Flight 175 crashed into the South Tower of the World Trade Center, it collapsed. The crash sent smoke spiraling into the air, coating the ground below with white ash that looked like the residue of a volcanic eruption. Moments after the building collapsed, all police and firefighters were ordered to evacuate the buildings.

10:03 am: Eighty miles southeast of Pittsburgh, United Airlines Flight 93, crashed into a field near Shanksville, Pennsylvania after passengers attempted to wrest control of the plane from the terrorists before the plane reached the hijacker’s intended target in Washington, D.C  The passengers of Flight 93 died heroes.

10:28: One hour and 41 minutes after Flight 11 crashed into The North Tower of the World Trade Center, it too collapsed. The Marriott Hotel at the base of the tower was destroyed by the collapsing building.
10:50: Part of the Pentagon collapsed.
By noon, airspace over the 48 contiguous United States was cleared of all commercial and private flights. It remained clear for three days.
Osama bin Laden, leader of the Islamic terrorist group al-Qaeda initially denied involvement but later bragged about the success of the mission, citing U.S. support of Israel, the presence of U.S. troops in Saudi Arabia, and sanctions against Iraq as motives for the attacks.
The United States responded by launching a War on Terror. Troops invaded Afghanistan to depose the Taliban, a militant group harboring al-Qaeda members and the US and her allies went to war in the Gulf.
There are those who do not support the war. Those who believe it’s a war for oil. Or revenge.
I believe it’s a war for peace—a war to ensure safety on American soil. As long as terrorist are allowed to murder and destroy without fear of reprisal, no one is safe. Al-Qaeda terrorists didn’t attack an enemy. They attacked innocent civilians of every race, creed, color and age. Muslims as well as Christians and Jews died in the 9/11 attacks—children and women as well as men. In all, more than 3000 people died that day. And the hunt for Osama bin Laden began.
After years at large, 40 troops, largely Navy SEALs raided a compound in Pakistan, killing the terrorist leader. On Sunday night, May 1, 2011, President Obama announced, “Tonight I can report to the American people and the world that the United States has conducted an operation that killed Osama bin Laden. Justice has been done.”
But the fight against terrorism continues…
So, on this day, ten years after terrorist attack, let’s remember the innocent lives lost, the families of those who died, and the heroes who rose to the occasion. 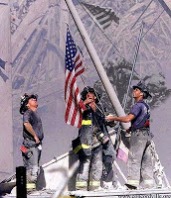 From the firefighters, first responders, and policeman who responded that day to the men and women of the armed forces who continue to fight against terror both at home and abroad, I thank you.