Or is it more like a possibility of love at first sight?

My mom swears she fell in love with my dad at first sight. It was sometime around 1952 or 53. She lived in Virginia but was visiting her aunt and uncle in North Carolina when she saw my dad working on a car. Actually, he was more or less building a car. It was just a car frame with vinegar jugs for a gas tank and an old sofa for the seats. But the car worked and my mom was impressed. She was 14 and he was 16. He hardly even noticed her.

Then, eighteen months later, my mother dated one of my dad’s friends. They went on several dates and my mom asked her “boyfriend” if they could go on a double date. She asked until the boyfriend finally invited my dad and the girl he was dating. A few months later, my dad was dating my mom and eighteen months or so later, in 1956, my parents were married. This April, they will celebrate their 55th wedding anniversary.

Spring forward to 1979. I came home from college for the weekend and went with my sisters and a friend to a night club in Virginia. We lived in North Carolina, just over the Virginia line. A friend of my sister’s friend asked me to go with her to the bar. And there, I saw this adorable man with dark hair and the most beautiful blue eyes I’d ever seen. The friend of a friend introduced us. And we hit it off immediately. That night, he asked if he could take me home. I replied, “No. I’m driving. But if you really want to know where I live, you can follow me. I live with my family.” 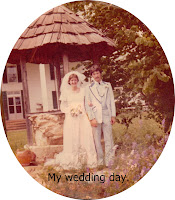 At the time, I thought I was being smart, letting him know I didn’t live alone, but I’d kill my daughters if they ever did anything this stupid. But, Johnny followed me home and even came in the house to meet my mom who was waiting up for my sisters and me. Ironically, Johnny was from the same town in Virginia where my mom grew up and they knew many of the same people. I went on a date with Johnny the next night and eighteen months later, we were married. This June, we will celebrate our 31st wedding anniversary.

So, was it just the possibility of love my mother and I fell in love with? Was it nothing more than sexual attraction? Or was it love at first sight?

I vote for love at first sight. What do you think?

5 thoughts on “Love at First Sight- Do you believe it?”