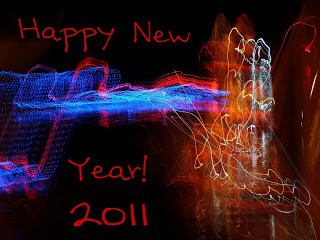 I can’t believe another year has come and gone. I seem to measure my life not in days, weeks, or months, but in Summers and Christmases. And the older I get, the closer Summer and Christmas seem to get to one another.

Along about September, I start getting ready for Christmas. Though, truth be told, I sometimes start my Christmas shopping in July. I like to get a head start on gift buying because I like buying presents for the people I love and can’t afford to buy nice ones if I have to do all my Christmas shopping between Thanksgiving and Christmas. I know. I know. I could save money. But that’s never been my strong suit. And I use my Christmas club money not for gift buying but to pay the lot rent on my beach camper.

My husband and I actually started the holiday season off at the beach. The first weekend in December, we went to our camper so we could see the Christmas Flotilla in Beaufort. 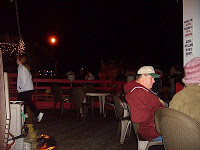 We had clams and beer at The Dock House Restaurant before the parade started.

After eating supper, we stood along the water front and watched the parade float by.

The boat parade runs along the water front from Morehead City, NC to Beaufort, NC. And it is truly a sight to behold. 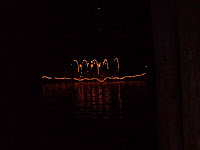 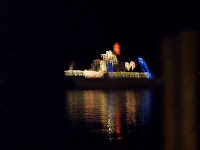 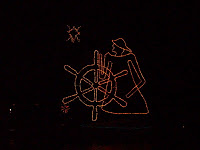 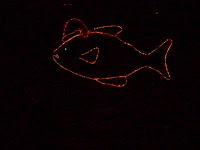 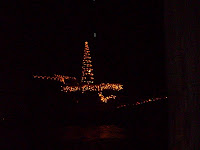 This year there were even snow flurries on the waterfront. And it snowed on the beach last year and this year. I didn’t see it either time. And although I much prefer warm weather to cold, it is my life long dream is to see it snow (and accumulate) on the beach.

As of this year, I’ve only seen snow on the beach 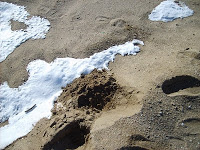 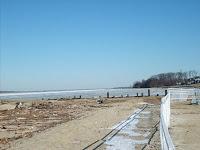 in Virginia. While visiting relatives in Fredericksburg last February, we took a side trip to a beach along the Potomac River. It was freezing! But beautiful.

And on October 18, 2010, I signed a contract for my first published historical romance. SLIGHTLY TARNISHED is an British-set historical and is set for release from The Wild Rose Press’ English Tea line sometime next year.

I also received my first royalty check, making me a professional writer this year. There were book signings and blog appearances and I’ve genuinely had a good time with my new career.

And hopefully, I’ll one day get to see it snow on the beach.